A quick trip to Guilin

So this morning we had a pretty good breakfast before meeting our guide to take Matthew for his medical exam and immunization. Our guide, Kelly, was busy with other families so she had her sister Lily take us. Lily's English is not as strong as Kelly's but we quickly learned she was a force to be reckoned with.

Before we headed to the clinic, Lily had Kelly on the phone sharing the newest development. Kelly shared that she was just notified that Matthew had to return to his home city to apply for his passport. That we needed to catch a 1:00 bullet train to Guilin for a 3 hr train ride in order to get his passport applied for and processed for our consulate appointment on Monday. What???

A ton of questions came flying out. What about his medical? Why do we have to do this? Why didn't we know this before we left his province? How much extra is this going to cost us? (Since we had already bought two sets of plane tickets I was not looking forward to adding round trip bullet train tickets). Do we all need to go?

The first question was easy - yes, we'll still do his exam but we are going to try to expedite it. Why not, every thing else in this process has had to be expedited, why does this not surprise me. This is where Lily's fierceness came out. After arriving at the medical clinic she kicked it into high gear. There are a number of "stations" you visit in order to complete the exam and she raced us through them all. She was like a little tornado racing from exam room to exam room determining which ones we needed to do when. She cut in when doctors were talking to ask that they see us now, because we had to catch that train. She convinced other families to let us go first, and at the end, she was one persuasive force. Matthew had to have three immunization shots as part of his exam. The clinic insists you stay for 30 minutes after the shots before they let you leave. We didn't have 30 minutes so she told them all to sit and for me to go with her to convince the doctor we needed to leave now. We went flying into a room where she spoke to the doctor and asked him to sign our release (at least that's what I thought she was asking for). He said no very clearly. She responded with a firm "yes" as she pointed on the form where he needed to sign. He again shook his head no. Lily was taking none of that. She was relentless and after a few more exchanges he signed off and we were on our way. We were in such a dash, we didn't have any time to take any photos.

Kelly met us in the lobby and explained more of what happened. I had used Red Thread to send a photo album to Matthew after we had received our LOA. I had asked Ann to rush it since at that time there was still a slim possibility we might have a May 23 gotcha day. Apparently when it was delivered to Matthew, Ann told them our gotcha day was May 23. The orphanage hadn't been told that so they panicked (instead of verifying it) and started his passport paperwork, not knowing that it was only good for 10 days. So Matthew's thumb prints expired before they issued his passport, and he needed to return to Guilin to reapply and do his thumb prints.

We decided that only Chris and Matthew would go, and Andrew and I would stay back. There was limited seats available on the train and Kelly had no idea if they would even be able to get tickets. So off they dashed to the train station and we returned to the hotel.  Chris described what Kelly did next as being the "tiger woman". They got to the station with only about 20 minutes to spare, and there was a long line to buy the tickets. Kelly told us later she tried to buy them online but it wouldn't let her so she had to get them there. She kept trying to talk to those in line asking to let Chris cut in front of them. Finally she  found someone who agreed to take Chris' passport up to the window and buy their tickets for them. There were only "standing room" tickets as the seats were all sold, but they were getting on that train. and apparently there was only one ticket left.  Again, Kelly turned on her tiger fierceness and convinced them to sell her 2 tickets. I am certainly glad to have both Kelly and Lily working on our side during this, but almost feel sorry for those that were on the receiving end. They both are determined individuals who know how to make things happen, and we are thankful for all that they did for us.

Kelly told Chris that they had a guide hired to pick him up at the Guilin station and take them to the passport office where the orphanage director would be there with all the paperwork ready except for Matthew's thumb print. So they went through security with only minutes to spare before the train left, and took their spot in the area between two cars (standing room). And Chris said there was no air conditioning there, so it was a bit miserable. Luckily, after the first stop there were some seats that opened up and the train personnel came and took Chris and Matthew to the open seats for the rest of the trip.

Arriving in Guilin, Chris said as they got off the train, Matthew grabbed his hand and said very loudly, "Baba, let's go". Chris said it was like Matthew wanted everyone there to know he had his dad with him. They rushed to get to the passport office and did meet up with the orphanage director and Matthew's caretaker Mr Wu. Matthew was excited to see Mr. Wu again and started talking his ear off. Best Chris could tell, he was telling him all about us and that he liked his new family. Paperwork finished, they had some time before the return train time, so the orphanage folks drive them around the city alittle, showed Chris where the orphanage was located, and then took them out to dinner. It was a great dinner and a great time for Chris to learn more about Matthew's orphanage. And for them to learn more about us. Mr. Wu, who has worked at the orphanage for 16 years, has been with Matthew for the nearly 14 yrs he's been there. So he is very attached to him and seemed to be interested in learning more about his new family. And also seemed pleased to know that Chris' brother is a little person too, along with his sister-in-law and our niece. He is very happy for Matthew but it is hard to see him leave. He hopes he will stay in touch and send photos and updates to them. 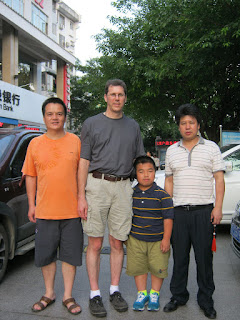 So it was another 3 hr bullet train ride back to Guangzhou. A very long day for my guys, but what a blessing for us to have the many pictures Chris was able to take of Matthew and his orphanage director and caretaker. And Chris was able to experience a little bit of Matthew's city.  Although a very intense day, it ended up having a lot of good come from it. Now we're hoping that's the end of our last minute changes and unknowns. We'd like for the rest of this trip to be uneventful and go as planned please, starting with us receiving Matthew's passport before we have to leave for the consulate appointment on Monday. Fingers crossed.
Posted by Deb Himsel at 11:30 PM