When we arrived in Beijing we found out that our consulate appointment was a day earlier than all of our plans were made around.  As I said earlier, with this being expedited, we had to do things a bit out of order.  Our agency however went ahead and purchased our plane tickets assuming our appointment would be 6/7 or later.  Well, we got our appointment set for 6/6, which means in order for Matthew to get his medical exam and his TB testing done before the appointment we have to leave for Guangzhou today.  This also meant we had to buy another set of airline tickets for the flight - no change fees, no exchanges, just purchasing another full set of tickets.  I was not happy to say the least, but it is what it is.

Because our stay in Nanning is shortened, we don't have the opportunity to visit Matthew's city, Guilin, and we don't have time to do any sightseeing in Nanning. Given the heat index here, I'm pretty sure we are all thankful that we aren't out touring the parks or hiking through some nature preserve. But we did worry we weren't getting a good feel for Matthew's province.  So we did a little googling to see what our options were and asked Glen if we could visit the Guangxi Museum of Nationalities, since our flight wasn't until late tonight. He thought it was a good idea - a great way to learn about the province, and we would have plenty of time.  So that's what we did. And given the air conditioner in our hotel room was not working, we thought the museum might be cooler than just staying at the hotel.

At the museum we learned that there are a lot of similarities between Matthew's province, Guangxi, and the other kiddos' province, Guizhou. Both have a lot of minorities represented, and the museum showed quite a bit of the cultural differences between the groups. It was fascinating to see the different clothing and traditions.  We saw a unique style of embroidery that is reflective of the province. It helped us to better understand one of the gifts we received from the orphanage - an embroidered satchel. Glen was filled with information and was thoughtful to highlight things that were specific to Guilin., Matthew's city.  We learned... 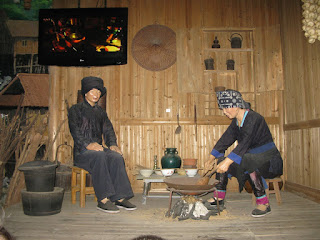 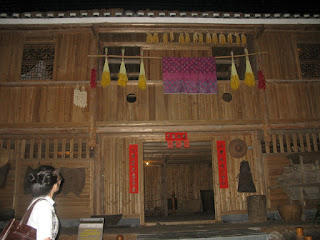 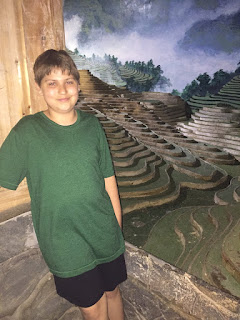 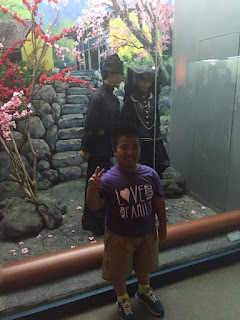 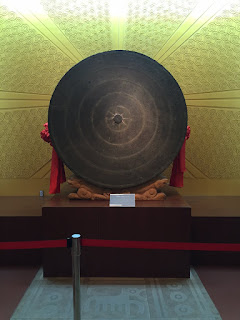 We are so glad we took this time to learn about Guangxi. We now have a better appreciation of where Matthew is from, and a desire to come back and visit Guilin in the future.

After our time at the museum, Glen took us to a Chinese restaurant for lunch. All through the day he has taken time to talk with Matthew, answer his questions, help him to ask us questions, and in general being very kind and attentive to him. I think Glen developed a soft spot for our boy.  The lunch was some of the best we've had - like Guizhou, Guangxi is known for its spicy foods.  Glen and our driver joined us, and Glen used the time to answer Matthew's questions. He had questions about flying, his school, how many computers we have, and a bunch more. Glen did share with us that Matthew asked if he could sit next to mama on the plane and maybe I could hold his hand if he is afraid. Didn't take me long to say "you bet".

After going back to the hotel to pack up and wait for our time to leave for the airport, we started our journey to Guangzhou. We had to leave for the airport earlier than usual because we needed to avoid the 5-5:30 traffic mess leaving the city. That means we get to spend a lot more time at the airport. Glen helped us navigate ticketing, and he spent a bit of time talking to Matthew before he was ready to leave. Then we were on our own to wait it out. I'm not sure I've been in any hotter place than the Nanning airport - they have large glass windows letting the sun beat down on you at the gate, the humidity is almost unbearable, and the air so thick it hurts to breath.  Chris of course made us all feel better when he checked Guangzhou's weather and shared that it was even hotter there.  Fingers crossed our hotel room's air is working.

As we boarded and got in our seats, I was reminded of the little things we "just know" because we fly so often, that were unknowns for Matthew.  I watched as he was intrigued with the overhead lighting and fans.  The tray table was next. Having to tell him about how his ears might feel as we took off and landed, reminding him that he can't put down the tray table until we are in the air, watching him as he wanted to look out the window on take off but was a bit worried about being afraid of heights.  Everything was new to him, but he handled it like a champ. Of course, he couldn't wait until he could have have my iPad to play with.  It was a short trip, and before long we were on our decent.  Matthew's ears definitely bothered him this time, but he was more worried about being hungry. He told me a number of times how hungry he was, and not for those crackers and tea the plane tried to feed us - he wanted real food.  And after claiming our baggage and meeting our guide, he told her he was hungry too.  I'm pretty sure he thought i wasn't understanding him so he would try someone who spoke his language. But he got the same answer - we'll get food at the hotel.

The hotel is great but we really only cared about two things - did the air work and could we still get room service?  The answer to both is a big YES! The cool air never felt so good as it did in that room.

While waiting for our food to arrive I let Matthew have some QQ time. He was very excited to show me a bunch of photos of him that someone at the orphanage sent him.  Each one he got, he would shout out 'Mama' and run to show me.  We save the, all to the phone, as those are precious memories for him that I want to make sure we don't lose.  This boy's life is changing so fast for him, that having the comfort of his past will hopefully help him with what is to come.

Tomorrow we tackle the medical exam and TB test. I think I'll wait until breakfast to tell him he's probably going to have to get some shots.  Why spoil an otherwise awesome day with that news.