Our night together went really well and we had to be up bright and early to head back to the office of Civil Affairs. But first was breakfast. Matthew has a great appetite, and loved the buffet. And how lucky are we that they had chicken feet on the buffet. You should have seen his eyes light up when he opened that serving dish. I told him to eat up, I'm sure we won't be having any of those back home.

As we left the hotel room, I told Chris I thought it was a good sign that Matthew left his backpack in the hotel. We headed back to the office for the formal registration of the adoption. The official asked a few questions about how our night went and asked Matthew how he felt. He said he loves his new family. So within just a few minutes we had our official adoption ceremony. Talk about a quick trip. Only took about 15 minutes for all that to take place. After the presentation of the gifts we headed to the Notary's Office. That didn't take long either, but again we noted that it was much more formal than our previous adoption. There was another interview process for us and for Matthew before it was completed. We saw his caretaker one last time and was able to get the email address for the orphanage and the name and address for Matthew's friend that was adopted last year. 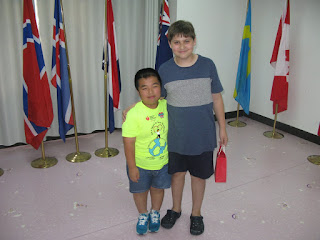 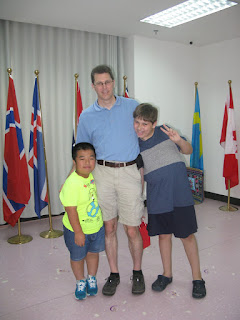 When we were finished, Glen took us shopping to get Matthew some clothes. I was completely surprised at how much the orphanage sent with Matthew. His backpack was filled with snacks, a couple changes of clothes, his uniform for competing, another pair of shoes, toothbrush, and some money. I think they really care for him and wanted to send him off well.

We visited a department store and found him a few things. I was most worried about shorts and underwear, as I had brought a few shirts for him that fit. He was pleased with our purchases and so we headed off to get lunch to take back to the hotel - this time we ordered the dishes.

After a good lunch and relaxation, we taught Matthew how to play Uno. He caught on quickly and chuckled out loud each time he hit mama with a Draw 4. His smile and laugh are great. We played quite a few hands, and despite Matthew's attempts to add to my hand, Mama emerged the winner! It had cooled down a little (and by cool down I mean it was no longer near 100, but closer to 90 degrees) so Andrew wanted to go swimming. Matthew had already told us he can't swim and is afraid of the water. So he didn't want to swim but went down and watched Andrew. Maybe he saw that it was possible to be in the pool and not drown. Maybe we'll get him in the pool in Guangzhou. We'll see...

The day ended pretty uneventful. A lot of Mindcraft on the iPads (Andrew figured out how they could be connected in the same world on their iPads, which both boys seemed to enjoy). Room service for a light dinner and off to bed. I had lent Matthew my iPhone to use for Google Translate a few times and so I would catch him picking it up and exploring some of the games I had on it. I didn't think much of it, until I got on my phone after they went to bed. I started getting all of these alerts form QQ (a social media app used in China). Apparently Matthew had no problems navigating the English App Store and downloading the app so he could connect with his friends. That will teach me - I put back on that passcode on my iPhone. We'll have to have some conversations about social media and computer use when we get home.

Again it really highlights how much more social Matthew is than Ella was when we adopted her. But he has a sweet and tender heart - I can tell already. Something I didn't post last night - when we were leaving Dairy Queen, Andrew grabbed my hand to hold as we walked through the mall. Matthew quickly came up to my other hand and latched on hard with a big smile and looked up at me and said Mama. Yep, there were a few tears in my eyes.
Posted by Deb Himsel at 10:00 PM