Another first for Matthew

These past two days we've been able to take a breather without being on the crazy train. We started our day off Friday with a shopping trip with other families from our agency, primarily to go the pearl market. It brought back memories as it was the same place we shopped 4 yrs years ago. We saw some beautiful fresh water pearls, and also shopped for jade and embroidered items. As we left the Pearl market, Kelly wanted to walk us through the local wholesale market. We remembered that from 2012 too - lots of turtles, birds, cats, and dogs along with herbs, dried sea horses, live scorpions and a whole lot of things we had no idea what they were. Sometimes you had wonder - pet or dinner? Definitely got a feel for the culture. We headed back to the hotel with lots of bags, and soaking wet from the heat. Kelly was taking a family for an orphanage visit that afternoon so we had time for ourselves. 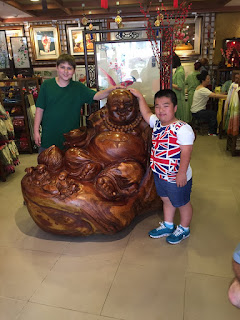 And that gave us time for Matthew to have another "first". While we were walking through the market we found a place to buy swimsuits and goggles. Matthew's eyes lit up when he saw the goggles, so we decided to go ahead and buy him a suit and see if we could get him in the pool. Well that didn't take too much persuasion. He was definitely afraid that it was over his head, but once I assured him I wouldn't let him drown and that he could touch if he stayed down at the shallow end, he started venturing himself. Before long he was putting his head under water, chasing Andrew (mostly hanging onto the edge of the pool, but he was getting braver), and competing with Andrew to see who could hold their breath under water the longest. Most of the time Matthew won that one. He certainly conquered his fear of the pool - I couldn't get him out. What started as an hour or so in the pool drug out to nearly 3 hrs. The boys were having a blast playing and every time I tried to get them to come out, one of them would jump back in for "just another couple minutes". 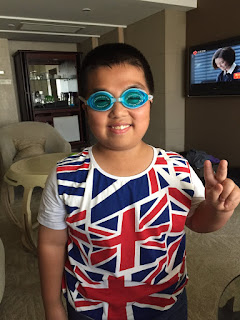 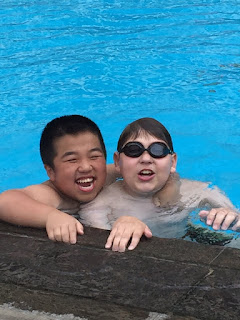 Finally we were able to get out once I promised they could go again tomorrow. Our boy who was afraid of swimming, certainly grew fins on Friday. It made for a late dinner for us, but so worth the joy of seeing him enjoying the pool and watching him and Andrew play together. We decided to try the Italian restaurant for dinner which was pretty good, but as we were heading back to the hotel, it started to rain. And within seconds, it was a major monsoon storm. We found shelter under the eves of one of the store fronts and we're hoping to wait it out. But it refused to quit and we knew we were just going to get drenched. Along came a girl with a backpack filled with umbrellas to sell - boy, talk about using the situation to her advantage. It was genius. I think everyone of us under the eves bought an umbrella from her - and I bought two. Even with the umbrellas, we still got our shoes drenched walking the 5 minutes from the restaurant to the hotel - it was a rain like I've never experience before. And wet shoes do not dry out in Guangzhou. Let's be honest - nothing wet dries out in Guangzhou. We washed out a few clothes 2 days ago and they are still wet and will probably never dry out. Ick!

Saturday was a free day for us, and we took advantage of it. We went to the local market for some snacks and drinks, and came back just before the thunderstorms started. That gave us time to play some Uno and Tensie (a dice game). And Mama won again! Matthew seems to enjoy playing games, but definitely wants his time on QQ. That may be a hard habit to reel in when we get home, but for now I'm letting him have some time in the evenings. Once the weather broke, I couldn't keep my boys from that pool. Matthew was begging to go swimming again, so I'm certain his fear of swimming is long gone. We'll have to get him in swimming lessons when we get home before he forgets how much fun he's had.

Tomorrow we'll get to do some sightseeing and shopping. And fingers crossed that Matthew's passport shows up. It's not here yet and that's got me nervous.
Posted by Deb Himsel at 11:30 PM