Today's the day. It started a bit uneventful. Breakfast and then our guide met us to go to the bank to exchange our money. Then we just had to wait until 2:30. That's a lot of time for your head to overthink things. What if he doesn't like us, what if he and Andrew don't get along, what if...what if...what if. 2:30 couldn't come fast enough. I'm pretty sure we were all nervous as we finally headed to the office of Civil Affairs.

Immediately Chris and I mentioned how different this was from our experience in 2012. This office was so much more official than where we did the adoption in Guiyang. This time we sat outside the office in a waiting area instead of being led into a back alley and taken up stairs to a cramped office filled with smoke. This time, it was very procedural. We were taken into the room and "interviewed", well really we were just told what was expected of us for the next 24 hrs. We signed a few papers, and then they brought in Matthew. He bounced in with a filled backpack and was eager to give hugs and shake Andrew's hand. He had been in Nanning earlier that week to compete in a "special olympics" type of sporting event. He proudly showed us photos of him wearing his 3 medals he received for shot put, javelin throw and discus. Look out Carroll, we have a future track and field athlete in the house.

Matthew was eager to answer questions and ready to head back to the hotel. After our family photo was taken, we headed back to the hotel to sign paperwork. All in all, it only took about 30 minutes and we were headed back. Glen had all of our official adoption paperwork for us to sign - we sign it today and it gets officially registered tomorrow. It was just odd to be signing all this official stuff in our hotel room - I'm hopeful it feels more "official" tomorrow when we are back at the Civil Affairs office. 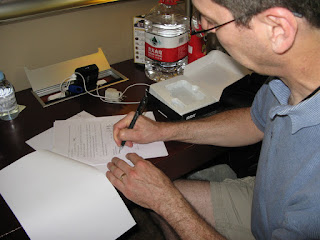 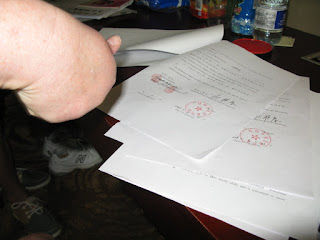 Paperwork completed, Glen spent quite a bit of time talking with Matthew and translating for us. Matthew is definitely not shy. He asked a lot of question - particularly about wanting to stay in touch with his caregivers and friends. We certainly will do our best. He also wants to know if he could come back to China to visit if he misses them. We explained that it is very expensive to travel to China but we intend to bring all of our kids back at least once for them to visit. This kid is so sweet. He said he wants to get a good job and make lots of money so he can pay for his trip back to China and take care of us as we get older. He said at the orphanage they taught him that he is to help around the house, be a strong boy and help take care of mama and baba. He is trying so hard to impress us. We had lots of laughs and smiles from him as he spoke with Glen. He also mentioned a friend he had that was adopted last year to Americans. He wants to know if we can try to find her. Glen is going to try to see if he can get the girls name and any information he can about her and we'll do our best. He definitely has a different personality than our quiet Ella.

Soon we were left on our own, and Matthew and I started working with Google translate on the iPad to communicate. His pinyin is not good so he's trying to figure out how to use the handheld translator. He keeps practicing. So he was excited when he found out he could just talk into Google Translate and it would translate for him. And left on his own he was quite excited to start exploring the other apps on the iPad. I had downloaded a few of Andrew's favorites so he would have something to do. He immediately started with Mindcraft and Subway Surfer. This kid is going to fit right in with our others. 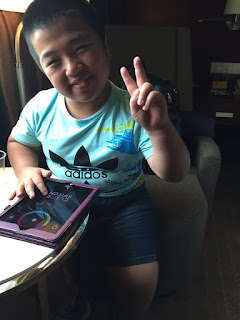 We decided to head to the mall to try to find something to eat. This hotel has little options and there is nothing around the hotel. So we ventured out for another cab ride, and tried to find a place we could afford to eat. After roaming the mall a little, we found one with a picture menu, and Matthew was very excited about one of the dishes so we decided to give it a shot. He was very proud to be the one who spoke with the waitress, and he picked out two dishes for us. He had told us earlier through Glen that he's not a picky eater but he does like his spicy food. He and Ella will get along well. Both of his dishes looked like spicy so I also decided to order a roasted chicken and some rice. As the food came, we realized we were in for some adventuresome dining. Good thing we ordered that chicken or we would have been quite hungry. I tried to use Google translate offline on the descriptions of the dishes but it wasn't working well. Now I'm pretty sure we were eating a spicy dish made up of tendons (the meal you could chew on one bite forever) and another dish with onions, duck tongue and intestines. Yum. We all tried a few bits from each dish, but man was I happy to have that roasted chicken, even if it did still have its head and feet attached. Andrew was a trooper. He ate the chicken and the rice and didn't gage too much when he tried the duck tongue and intestines dish (of course we weren't sure that's what it was until we got back to the hotel). Matthew ate like a champion though and the roasted chicken was some of the best I've ever eaten. And Matthew was excited that no one else wanted the feet or the tips of the wings so he could eat those. Hmm, pretty sure you won't be getting any of that back in the states so eat up my boy.

We headed to Walmart to pick up a few things, and let's be serious, we needed some peanut butter and crackers and something to drink. I tried many times to see if Matthew wanted any snacks or anything to drink. He wanted nothing. But on our way out we asked if he liked ice cream and a big ole smile came on his face. So back to Dairy Queen to wash down those duck tongues and tendons.

Back at the hotel, we Skyped with the kids. Ethan and William were so excited that we "had Matthew" and they could see him. Not sure what Matthew thought of our clowns performing on the iPad, but he giggled a lot and waved to his new family. I think we are going to be ok. And he was anxious to get the iPad back to play Subway Surfer. Before long it was time for bed - both Chris and Andrew could barely stay awake long enough to Skype. Andrew and Matthew were planning to share the bed but Matthew curled up on the chair (the benefit of being a little person is you can fit just about anywhere) and decided he would sleep there. I tried to get him in bed where he would be more comfortable but I wasn't about to force him to do something he didn't want. 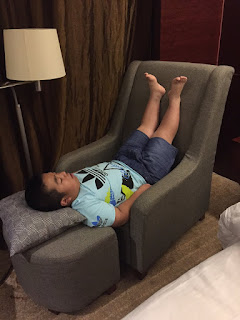 So he sleeps here tonight. We'll tackle the bed situation tomorrow night...well, maybe. All in all, not a bad first day.
Posted by Deb Himsel at 3:33 PM